The Rural Areas of the Civil Parish

Beyond the Village, there are a number of smaller settlements and buildings which are an important part of the character of the area. Many farm stead’s have been converted into housing bringing a greater population into the countryside. There are business parks at: Park Farm, Berwick Hill, Pont Park, and Prestwick Park, all boosting the local economy and bringing local jobs. There are various businesses located in the countryside providing services to the local community, not just for horse riders but dog kennels, catteries, cycle repairs shop and even a gym in a barn.

Local pubs and restaurants are located in the attractive countryside the Civil Parish. Pubs such as the Waggon Inn, the Highlander and the Badger all bring in custom due to their location. Dissington Hall is a prestigious conference and events centre and there is also a successful garden centre at Dobbies. The area is also seeing an increase in tourism and leisure developments, particularly linked to the Reivers Way National Cycle Route.

The hamlet of Medburn, a small linear settlement, a mile to the west of the Darras Hall Estate comprises a mixture of original village housing, small farms and some small home based business as well as newer executive homes. Medburn has grown significantly in the last 10 years largely due to back land development; however it has no village facilities or amenities.

A small hamlet centred around East Town Farm, approximately 2 miles north west of Ponteland. It was formerly a ‘pick your own’ soft fruit farm and shop.

The Cottage Homes were established in 1903, designed by Newcastle architects Oliver, Leeson and Wood for the Newcastle Board of Guardians, initially taking in children from the workhouse on Westgate Road to the west of Newcastle. Originally there was a superintendent’s house which included stores and an office, four blocks of semidetached cottages and a half block, initially intended to be an isolation hospital, arranged around an oval green. Each cottage was supervised by a ‘house-father’ or ‘house-mother’ and accommodated between thirty and forty children, about 300 in all. The homes, which were extended in 1913, eventually included a school, infirmary and workshops on site. The latter would have been used for general upkeep and maintenance in the homes and also for training the boys in specific skills.

During the early 1960s the whole site was taken over and established as the  Northumberland Teacher Training College. This was closed in 1981 and acquired by Northumbria Police for their Headquarters.

Located at the edge of the parish boundary, the area has a rifle range and office units. The central point is the farm and several cottages originally for agricultural workers in the area.

The Ogle family owned Kirkley Estates from 1632 until 1922. The Grade II Listed Hall was damaged by fire in 1929 and rebuilt on a smaller scale to designs by Newcastle architects Burns, Dick and MacKellar. It is located approximately 3 miles to the north of Ponteland. In 1946 the estate was acquired by Northumberland County Council and in 1951 Kirkley Hall Farm Institute was established.

In 1999 the estate became the land studies campus of Northumberland College. The campus has specialist resources and continues to diversify and expand. Approximately 90 people are currently employed on the site.

High Callerton is a small community that adjoins Ponteland. The settlement grew up around a range of farm buildings, manor halls and farmhouses. Some of the original traditional farm buildings were converted into residences in mid-1970s and 1980s. These changes have involved alteration, demolition and extension of existing structures. The result is the current built form of the settlement.

Berwick Hill and Prestwick have a variety of units offering professional, retail and cafe outlets. Many of the farm stead’s have diversified into B&Bs, livery, kennels, catteries, farm shops and holiday lets.

Mining around the Prestwick area has a long history as far back as the 13th century with bell pits at first and deep mining from the 18th century. There were offices, canteens and pithead baths when underground mining finished in 1966. From 1951 until 1990 an area near the railway was used as an explosives depot by ICI. Storage was in soil-covered bunkers on low-lying ground and the railway remained open for the trains carrying explosives. In 1995 Ward Bros took over the site and it is now being used for landfill. 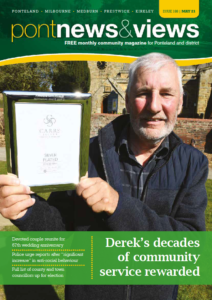